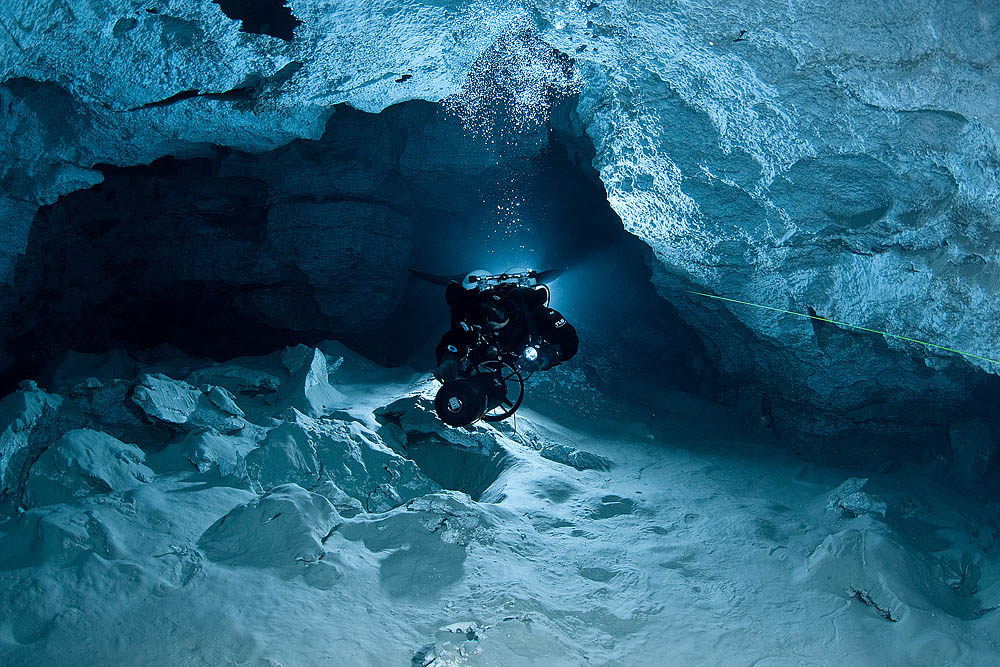 Scuba diving in caves is one of the most dangerous diving activities, but also the most interesting. Danger, facing fear, and the desire to prove themselves, drives people into dark submerged places. This type of diving should not practice without adequate training. The most widespread and accepted term is – Cavern diving.

This is diving in caves, but up to the limit of light and not exceeding a depth of 40 meters in depth or length. We must see the exit at every moment of the dive and must find it easy to return. Most suitable are those caves that are not deep or demanding.

For justified reasons. Safe diving in dark, unexplored caves is the most demanding and dangerous form of diving that requires a lot of diving experience. And serious continuous training. Not every diver is ready for something like that. Whether it be professionals or sports divers. The term “recreational diving” is inappropriate here. Read about scuba diving under the ice here.

We need to clarify some of the concerns that arise when mentioning cave diving. Such as the terms cave or cavern. And cave diving or cavern diving, because there is a difference.

Here, you will be introduced to the world’s most famous cave objects. which are predominantly destined for diving only experienced cave divers (with some exceptions). Let’s follow the original definition of caves as stated earlier in the text. So there are no world-famous “caves” in this list, such as Blue Hole in Dahab or Blue Hole in Belize. Yet, these are huge caverns, it is even more accurate to call them simply “holes”.

The Ural is not the first association with diving. But, the Russian region of Perm is the destination of many cave drivers. The Orda Cave, located in the immediate southwestern part of the village of Orde. in the Russian Perm region, on the eastern edge of the Russian plain, and is a unique natural object. This mysterious place is the longest underwater cave in Russia and the second in Eurasia. An incredible underwater gallery system. Locals have known about this cave for a long time, but its exploration began only in the early 1990s.

This cave still needs to be fully explored. There is a dry and an underwater place. The vastness of the Ordinskaja Cave is as high as 4.5 kilometers. Of which 4.2 kilometers are underwater. The depth is 43 meters, 21 meters to the surface of the lake and 22 meters below its level. The 1992 cave survey, started by a group of enthusiast speleologists. Divers call this cave a “white bride”. Because of the chalk-colored walls. Originates from rocks formed about 200 million years ago. These white gypsum rocks give the cave an almost surreal appearance on the inside. The huge gallery system hides spectacular channels, aisles, and cavities. The water temperature here is quite low. Between minus three and minus 20 degrees Celsius.

This Florida underwater cave system is one of the largest in the world. With over 19 kilometers of explored and mapped area. Adding to the fact that 2007 revealed the connection of this cave system to the Leon Sinks system. We conclude that the total length of this underwater cave is over 51 kilometers. Making it the longest in the US and the sixth-longest in the world. Divers began exploring Wakulla Springs in the 1950s. In search of mastodon and other animal fossils. Visibility in the caves is excellent throughout the year, especially in winter.

Even so, recreational diving is not allowed here. Only scientists and researchers can do it, and you will soon understand why. When diving in a cave area up to 40 meters deep, natural light is still available. Followed by narrowing and entering the main cave, there is no more natural light in this mysterious cave. About 70 meters deep and 120 meters away from the entrance comes a huge space called the Grand Canyon. 30 meters wide and over 50 meters high. Nearby there is a detachment called the Attic. Which goes to only 20 meters deep. Rumors say that here, you can hear the noise from a restaurant located on the surface, near the entrance to the cave. It then follows a ‘B’ tunnel at about 72 meters deep and 360 meters from the entrance. Otherwise, the tunnel also has the highest measured depth in the system, 97 meters.

This karst pit locates in the southeastern Mexican state of Tamaulipas. This is the deepest thermal water pit in the world. The Italian Pozzo del Mero is deeper, but there is still debate on whether it is the same type of pit. It was even believed that the depth at this cenote has no end. But NASA underwater robot in 2007 found the Zacaton to be 339 meters deep.

The Zacaton comes from a type of grass founded on the surface of the pit. In the form of small grassy islands that the wind spreads across the surface. The clear blue water in the pit is full of minerals, has a sulfuric odor, and is very warm, about 30 degrees Celsius. Access to this 116-meter wide cave is quite tricky. In 1990, the entrance to Zacaton was discovered through a nearby El Nacimiento spring. Through a passage called the Tortuga Muerta, 230 meters long and up to 17 meters deep.

The impressive depths of this pit have attracted many freedivers and cave divers. Trying to break various records here. For example, in 1994, Dr. Ann Kristovich set a women’s record in dive depth (169 meters). Even more famous is the case of breaking the men’s record. Dating from April 6, 1994. When diver Jim Bowden and cave diving pioneer Sheck Exley dived there. Which ended tragically.

Bowden was able to reach a depth of 282 meters and emerge, while Exley drowned between 268 and 276 meters. It’s believed that he died of HPNS syndrome. High-pressure nervous syndrome. This is a neurological and physiological diving syndrome. That occurs when a mixture of gases with helium is used at depths greater than 150 meters. Although it has never been officially determined exactly what happened. It’s assumed that for Exley was a fatal combination of HPNS and nitrogen narcosis. Exley was a true dive pioneer and was the first to standardize the use of an octopus diving regulator. Nowadays a common part of diving equipment.

Despite its “devilish” name, unlike in previous locations. This cave is more accessible to newbie divers. Besides being available to divers of all levels of certification. The site at Ginnie Springs offers beautiful cave scenes in the crystal clear water. Jacques Cousteau famously described as “endless visibility”. The local hotel facilities and campsite are fully equipped for scuba divers. They offer the possibility to buy or rent all diving equipment.

You can bring your whole family to this location. Because besides diving, you can enjoy canoeing, picnicking or playing volleyball. Daily ticket for cave drivers is $ 20, for open water divers it is $ 27, and a non-diving ticket is $ 10. The most popular cave there is the Ballroom. Open to divers of all levels, but only cave divers are allowed to dive at night. Inside the Ginnie Springs Resort is Devil’s Spring. It consists of a series of three springs that pump water into the Santa Fe River.

The system has two inputs. Called the Devil’s Eye and the Devil’s Ear. Which very quickly connect with water in a passage simply called the Gallery. ‘Devil’s ear’ is generally faster and easier to enter, but divers often use ‘Devil’s Eye’ for training. This cave system is one of the most famous and visited systems in the world. More than 10 kilometers of mapped passages contribute to this. Which can be explored for long periods. And always see something new.

Scuba diving in the Bahamas – Abaco

Suffice it to say that Abaco was the inspiration for James Cameron for his cult diving movie “Sanctum”.  More specifically, it is a network of mostly unexplored underwater caves and tunnels. Out of about 1,000 different holes in the Bahamas, only about 20 percent have been explored. And almost no cave has been fully explored. Some of them are up to 180 meters deep. Interconnected by miles of dark tunnels and passageways in all directions. Only experienced cave Divers can embark on the adventure. All the way, they leave behind Ariadne’s thread. Divers must equip with triple lights. If only one light does not work, the whole expedition is canceled.

Besides to mysterious tunnels. Along with mysterious tunnels. The chemical composition of water in underwater caves is dangerous. Bacteria found in a thin layer of rainwater on the surface of seawater. Produce hazardous gas hydrogen sulfide. If divers expose themselves too long to a gas formed in an air pocket in a cave.

Dizziness, delirium, and even death can occur. But what attracts people is a diversity that cannot be experienced anywhere else. These ocean holes are full of marine life such as sponges, lobsters, many fish, crabs, and other animals. The caves connect by beautiful tunnels of water so transparent that it seems as if it were air. All this makes Abaco a unique natural site in the world. His popularity is largely due to renowned researcher Wes C. Skiles. He has recorded many news reports and made many wonderful photographs there. Before he tragically passed away in 2010 while diving in Florida.

Pinagbuyutan Island, a top destination for a traveling diver