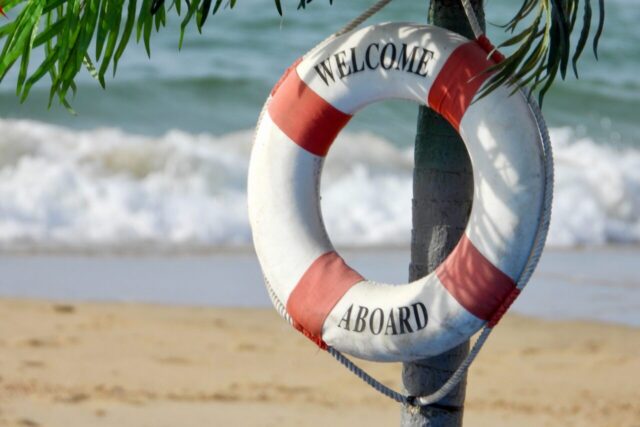 Living on the Sea

Diving all Day, Every Day: Living the Dream?

Many divers, professional and recreational alike, view liveaboard diving as the holy grail of the sport, taking you far away from land and straight into the heart of the wild as one of the lucky few who get to witness spectacles of nature found nowhere else.

As a professional scuba diver who has worked as a guide in the UNESCO-listed Tubbataha Reefs Natural Park in the Philippines, I have experienced first-hand what it’s like to wake up every day in your bunk surrounded by an ocean bursting with life. So, is living the dream all it’s cracked up to be, or is there more to it? What is it really like working as a dive professional on a liveaboard?

You Learn to Fear the Ocean

You’d think a dive pro would be fearless in the face of the ocean after backrolling into it for the 200th time in a couple of months, but the fear never really goes away – you just get used to it. Diving 4 to 5 times a day gives you a true appreciation for the unpredictable nature of the seas. A morning dive in Shark Airport can bless you with 40-meter visibility with a side of perfectly gentle drift currents, but then after a quick lunch, the same dive site is swirling with sediment so thick you can’t even see 40 inches in front of you. Sometimes, those same changes can happen on the same dive!

The more experienced you get, the more you learn not to take the ocean lightly. With each raging down current, distant waterspout, and sudden squall, you learn to bend to the ocean’s will, accepting your place as a mere observer to something that couldn’t care less for you or how much your guests paid to be there.

You learn that you can never lose focus, to always be on your toes. Your fear isn’t necessarily for yourself, but for the safety of your guests, and all it takes is a minute or two of underwater daydreaming for things to turn sour. Oh, and before I forget, don’t let all your worrying about what can go wrong distract you from pointing out that passing eagle ray!

There is a Simplicity to Life

Unlike living in the city where everything’s always happening and there never seems to be enough time, there is a beautiful simplicity to living on a boat floating atop an atoll hundreds of kilometers away from land. No longer oppressed by constant bad news and constantly worse traffic, you find you have many more quiet moments to enjoy – the catching of the sunrise as you set-up your team’s gear over freshly brewed coffee, watching clouds roll by on the sundeck, and finally being able to read that book you promised yourself 6 months ago. Your past city life slowly melts away and is replaced by a haze of eat, sleep, dive, repeat. On the boat, there’s nothing to worry about except for your next descent, and you’ll quickly find comfort in the simplicity of life uninterrupted by chittering phones or sour neighbors.

It Gets Crowded Down There

Liveaboards tend to go to places like Tubbataha, which are some of the most beautiful and remote marine destinations on Earth. For the most part, Tubbataha looks dreamier than any postcard, with its solitary lighthouse standing sentinel-esque against a boundless sky with clouds casting a perfect reflection in the glass-still water. Sometimes the water visibility is so clear that even from the boat you can see schools of jacks beneath the surface catching the sun as they churn like the gears of a steampunk engine.

What the brochures don’t tell you though is that more often than you’d like, you’ll be sharing the same dive site with five other boats, which means a hundred other wide-eyed divers who aren’t above finning full-pelt to overtake you and get first dibs on a shot at that passing whale shark. It goes without saying that the whale shark often gets spooked off and subsequent dive groups won’t see much more than a curtain of bubbles.

Even in a place like Tubbataha, not all dives are amazing – there are probably less than a dozen that I remember very clearly. As dive pros though, we tend to take for granted that even a bad day underwater is better than a decent one on land. By the end of the dive week, I sometimes caught myself going through the motions, day-dreaming about returning to land, even if just for our dusty port town with its singular passable restaurant and far less passable “4G” reception.

In port, once we were all snuggly docked and caught up with friends and the latest political scandals back home, the novelty of the familiar comforts and conveniences of land would quickly fade with each lungful of dust and dried fish. After less than a day at port, I would always find myself yearning to be out there on the ocean once more, wondering if the next dive is going to be one I’ll remember for a lifetime. It probably won’t, but hey, you know what they say about a bad day underwater.

Dive pros are all too familiar with guests gushing after a great dive that we have THE dream job, being paid to dive for months on end while being dazzled by an endless array of beautiful creatures in between hours lost lazing in a sunny stupor.

While the job can sometimes indeed be straight out of a dream, it’s still just that – a job. For every dive a guest enjoys, what they don’t see as they review their photos is the unloading, changing, and reloading of a dozen tanks, hours of waiting at the airport for guests to arrive on typically-delayed flights from Manila, that one grumpy guest complaining that our group didn’t see the nurse shark, and the weekly cycles of goodbyes to loved ones as you set off for yet another week off the grid.

Yes, the diving is spectacular and a place as diverse as Tubbataha still throws up surprises to even the most veteran of dive guides, but for the most part, the dives can actually get quite repetitive. You begin to learn what to expect at each dive site – the same mix of creatures hovering in their favorite spots, the same corals bending in the current, and the same routes through the reefs.

You’ll Still Get Surprised, Even After Hundreds of Dives

Sometimes though, often in the most dull and predictable of dive sites is where you get the biggest surprises – a Volkswagen-sized grouper waiting in ambush, a shovelnose ray cruising above the sediment, or a trio of turtles awkwardly positioning themselves to go at it threesome-style. Always keep your eyes open – you may just miss that one-in-a-hundred moment.

I once saw a “superschool of jacks”, perhaps the size of more than a dozen large schools put together, blanketing the reef below us. Taking more than fifteen minutes to swim past us start to finish, they were reminiscent of the vast herds of wildebeest you see on National Geographic – an endless group tens of thousands of individuals strong.

On another dive, naturally in the most unremarkable dive site of the park, we were led into the blue by a scalloped hammerhead shark – an amazing sighting seen maybe once every thirty dives. It brought us further and further from the wall and straight to a school of a dozen large hammerheads sharks circling in a tight ball.

So what’s the dive of my lifetime so far? It started with a gentle drift and two huge whale sharks swimming side-by-side directly into us. I turned around and coming from behind was another whale shark. Seeing three whale sharks in a week would mark a successful trip, so seeing three within the first five minutes of the dive automatically made it one of the best dives of my life. It didn’t stop there though, as whale sharks were coming in at all angles. Midway through the dive, I lost count at 13 whale sharks, and yet they still kept coming. Most were just cruising by, but a few were the playful types who toyed with our bubbles and chased schools of barracuda 100-foot tall into the blue. There were even a manta ray and a hammerhead for extra kicks. If that wasn’t enough, after the dive a pod of spinner dolphins came right up to us, dozens of them breaking the surface, and with a quick peek underwater, hundreds right below – this was nature at its most spectacular. The next three dives all yielded dozens of whale sharks as well. Check out our story about diving in Costa Rica here.

Of course, I don’t have a single photo or video of my own to remember any of these amazing moments. I’m there to work, and no one wants to follow a guide who leads with his camera, so good memory is a must for dive guides who wish to enshrine their most memorable moments. Even if you do end up forgetting most of your dives, the feeling of being submerged amongst underwater life unchanged over millennia in one of the best-preserved marine environments left on earth will forever be burned into your mind.

You’ll remember that this really is a dream job; it is every bit as wonderful as people say. It’s not perfect, and at times you’ll be so exhausted and homesick that as you gear up for a night dive you could really do without, you’ll just wish you were on your couch with your dog watching the latest season of Money Heist. Deep down though, you know you wouldn’t trade it for anything as you’re fulfilling a dream you’ve had since you were a child reading about sharks in some kiddie shark book. There is no replacement for being close to nature, and on a liveaboard in the middle of nowhere, you couldn’t get any closer.

I first fell in love with the underwater world as a 10-year old being taken “diving” by my mother using her octopus in a couple feet of water at the local reef. Since then, I’ve become a dive instructor and spend my summers working as a dive guide in Tubbataha Reefs National Park in the Philippines.

An amazing gift for those who love Underwater Imaging!