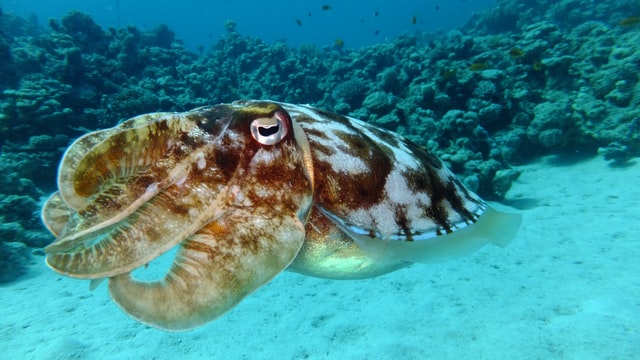 Scientists wanted to learn how cuttlefish can see in three dimensions. So they equipped them with stereoscopic red and blue 3D glasses. They found that although their eyes are very different from ours, the way they look is not that different.

A research team led by the University of Minnesota built an “underwater cinema” at the Marine Biology Laboratory in Woods Hole, Massachusetts. The aim of the study was to conclude how cephalopods determine the exact distance from which to attack their mobile prey. Cuttlefish use their limbs to catch in the rocks. If they are too close, they can be detected and must escape because their limbs are too short.

The common cuttlefish (Sepia Officinalis) trained to wear 3D glasses and attack images of two prawns. The prawns were of different colors displayed on the computer screen. By comparing the images, the researchers were able to determine that cuttlefish use stereo-psis. A technique also used by humans to connect images between the left and right eye. And calculate the distance to their prey. “When only one eye could see the shrimp, which means stereopsis is not possible. The animals took longer to position themselves properly.”Said Trevor Wardill, an assistant professor at the Faculty of Biological Sciences at the University. “When both eyes could see the shrimp. Meaning they use stereopsis. It allows the cuttlefish to make faster decisions when attacking. That can make a significant difference in catching a meal”.

“Although cuttlefish have similar eyes to humans, their brains are significantly different”. Assistant Professor Paloma Gonzalez-Bellido added. “We know that the cuttlefish brain is not segmented like the human brain. They don’t seem to have any part of the brain. Like our occipital lobe, dedicated to vision processing”.

She also said the research showed that the cuttlefish brain must contain an area that calculates the differences between the images on the left and right. Unlike related squid and octopus, cuttlefish can also direct their eyes forward as well. It’s because of this they could be the only cephalopods that can use stereopsis. The only other invertebrates known to use this technique are mantises. “This research takes us a step further toward understanding how different nervous systems have evolved to tackle the same problem.” Said Rachael Feord of the University of Cambridge. The first author of a study just published in the journal Science Advances. The next step is to dissect the brain circuits needed to calculate stereopsis in cuttlefish. In order to understand the differences between our and their brain and how it functions.

Thanks to advances in science, more and more common anatomical and functional groups in humans and animals are found on a daily basis. In line with a better understanding of individual animal organisms. This can also help us to one day understand even better and more thoroughly the evolution of individual living beings, including man.

Who knows, the next time you encounter cuttlefish on a dive, you may perceive them as less primitive creatures than before.

Thanks for reading, take a look what research says do dolphins have a personality.

Is scuba diving bad for your lungs?

Do dolphins have a personality?

Underwater museum in the Mediterranean Sea